Curtain Hair Is Taking Over – Learn to Style it Yourself!

What is Curtain Hair?

Curtain hair is a medium-long fringed hairstyle that mimics the look of curtains in the way that it hangs down both sides of the face, framing it.

Curtain hair is a term that generally applies to men and is a style that suits both the young and old. In some cases, curtain hair is also known as “E-boy hair”, “comma hair”, and “Korean hair”.

Features: Curtain Hair Throughout the Years

It’s thought that curtain hair originated from the early 1900s, taking the place of the long hair and sideburns that were fashionable during the late 1800s. Curtain proved to be a shorter alternative that was also more practical, as most men to adopt the trend were of the working class or played sports like rugby where long hair was impractical.

Curtain hair made a revival in the 70s and then again in the 90s after fading out in the mid-1900s. In the 90s, curtain hair made a comeback with many male celebrities adopting the trend. Most notably, members of the Backstreet Boys, Tom Cruise, and Keanu Reeves sported this style in the 90s.

The Pandemic is largely to thank for this recent 90’s blast from the past, as people stopped going to the salons, started letting their hair grow, and began embracing their inner Backstreet Boy. The popularity of TikTok and other social media platforms has also caused the hairstyle to gain popularity all at once—in the blink of an eye.

The curtain hairstyle is characterized by a long fringe that’s paired with either a side or middle part and shaved or short sides and back. Curtain hair can be curly, wavy, or straight, and can range in terms of how voluminous it is. In addition, the fringe length can vary from short (roughly eye-brow length) to much longer (chin length).

Who Brought Curtain Hair Back Again?

In addition to the famous names mentioned above, we have various Kpop idols like Jung Kook from BTS and Kai from SuperM to thank for bringing the curtain back, not to mention Chris Hemsworth, Cole Sprouse, Zayn Malik, and Ian Dior.

Curtain hair is a collective name for a group of curtain-like hairstyles. Within this group, there are a number of variations and substyles that you can try, adapt, and customize to fit your unique preferences and tastes. These variations are marked by differing lengths and textures. For example, one style might be short and curly while another is long and straight. 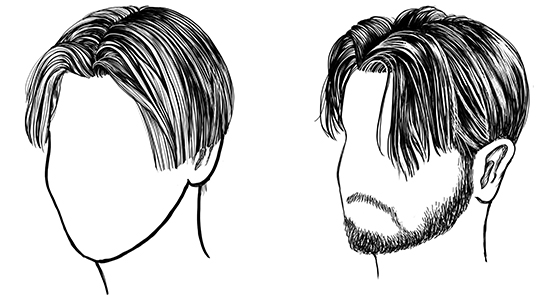 The standard curtain hairstyle gives off an air of sophistication and class, as it was popular in the 1900s and is, therefore, very traditional. It’s a relatively short style, with the fringe of the style roughly falling to the eyebrows. Typically, the hair is straight and combed then stuck into a C shape towards the middle of the forehead using a pomade, gel, or wax.

This curtain style looks particularly polished on men with a subtle jawline, as its defined edges and shape bring contrast to the gentle curve of the face.

Alternatively, the C-shape may be left out, with the fringe falling more vertically over the eyebrows and being less defined. 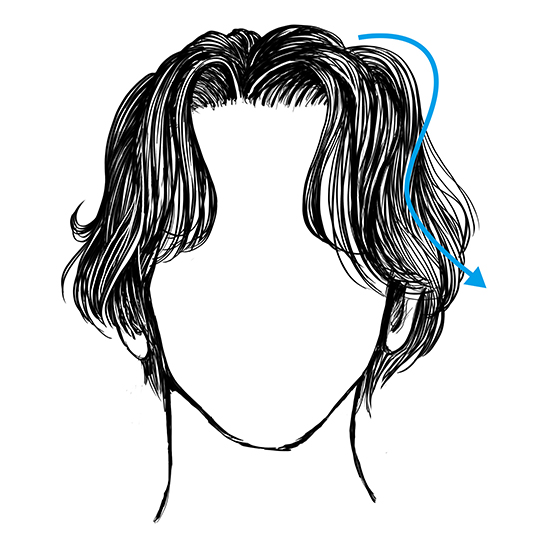 The S-shape curtain style is similar to the standard style. The difference is quite simple. While the standard curtain hair style is either straight or curves inward, making a C-shape with the fringe, the S-shape bends in once and then flips out again at the tips. This gives the fringe the “S” shape from which it gets its name. It is recommended to use hard spray or sea salt spray to maintain the iconic S or C shape of this hairstyle.

You can accomplish the S-shape with short or long fringe, and it works well on hair that is both wavy and straight. 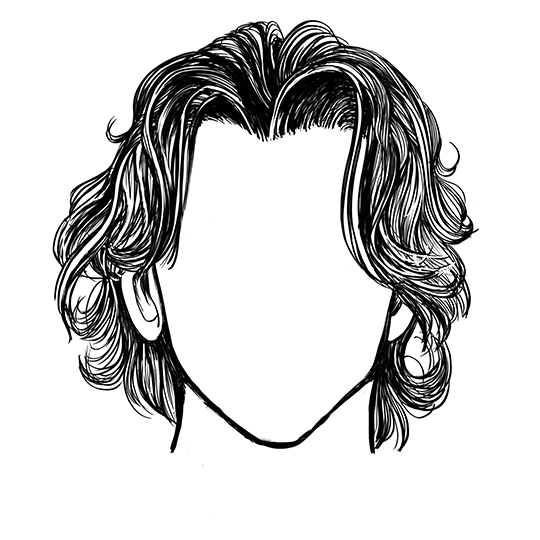 Having curly hair transforms the standard curtain hairstyle into a unique style all of its own. Men with naturally curly hair can rock this style without too much effort, as it works with their hair’s natural texture. It’s a super easy and versatile style since it requires very little effort and can be worn whether your hair is long or short. It can also be worn whether your hair is wavy or loosely curled, or coiled. You can also apply a little bit of curl or wavy hair styling products to give the shape a longer hold.

When wearing this style, the length of the rest of your hair plays a big part in how it looks. If your hair is longer on the sides and back, your overall hairstyle will look more relaxed and casual, while if your hair is shorter, it will look professional, mature, and be more suitable for the office. 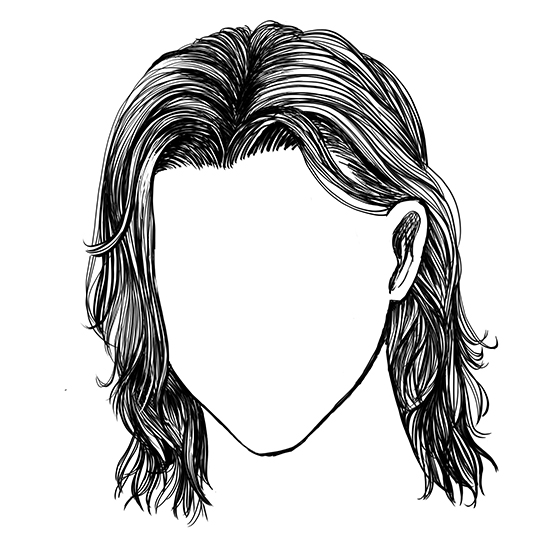 Medium/long curtain hair is also commonly known as “grunge hair” because of its high popularity within the 90s, which was known for its grunge style and rock music. This curtain hairstyle is longer than most of the other styles and can be worn with wavy or straight hair.

For this style, the fringe and the rest of the hair are both relatively long, although the fringe is slightly shorter. A hair balm or sea salt spray are great for arranging medium to long curtain hairstyle.

With the recent revival of various 90s trends, we’re seeing an increase in the prevalence of the medium/long curtain hairstyle on men. The lockdowns in place during the Pandemic meant that people were frequenting hair salons less, which naturally means that they started wearing their hair longer. The recent trend toward genderless fashion and styles is another reason long hairstyles are becoming more and more popular. This trend is expected to continue expanding within the next few years.

How To Get Curtain Hair 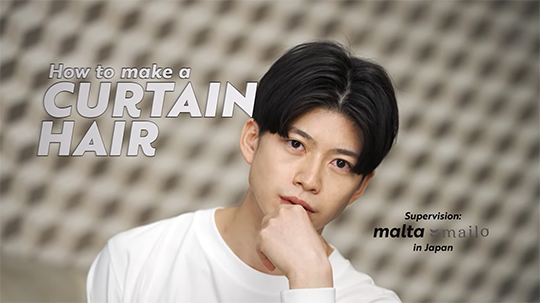 How To Style Curtain Hair By Yourself

All you need to do in order to get a curtain hair style is have length on the fringe. No skills necessary—we’ll teach you everything you need to know about how to style it yourself so you can style curtain hair at home.

While you certainly could do this style with clean hair, it’s not absolutely necessary. Just wet your hair all the way down to the roots before styling. 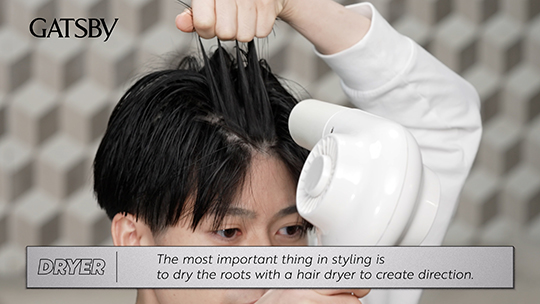 Now we create the base of the curtain style. Towel dry your hair by pressing down on it (not rubbing it!) to remove most of the moisture.

Now we break out the hair dryer. The key point is to divide your hair in the middle while lifting it up as you’re drying the roots to give it shape and volume. Start at the front/middle and slowly move your way back, lifting from the roots as you dry.

Next, you can make a simple part using your hand, touseling it slightly to the sides as you move your fingers to the tips of the hair. 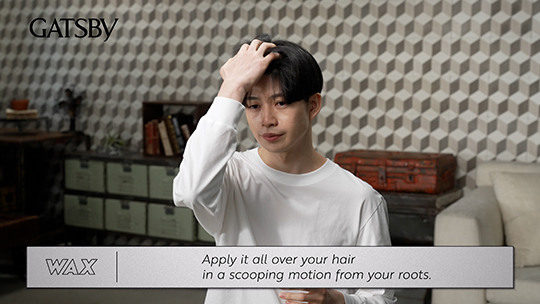 How much product you need to use varies depending on how much fringe you have, the position you want to secure it in, and which product you’re using. A dollop about the size of a US quarter should be enough for curtain hair, but you’ll want to adjust it according to your hair texture. Use enough that your fringe maintains its hold and position when you move your head around, but not so much that it looks dingy and weighed down.

The most recent curtain hair trend is less tight and shiny than the 90s version, creating a more relaxed, casual look. To keep your hair looking freshly styled, we recommend a natural hard wax or matte wax, as opposed to the hair foam, gels, and pomades that were popular 25 years ago.

How to Order Curtain Hair at the Salon

When at the salon, you can ask for curtain bangs by telling your stylist that you want low-maintenance bangs that frame your face and stay true to your middle part. Tell your stylist how long you’d like your hair to be, and that you want it the longest at the top with no layers. We won’t tell you “this is absolutely how your hair needs to be,” because it’s not all about the cutting, but the styling. As long as you have some length to work with, anyone can achieve this look.

Curtain hair is a versatile style, whether you are looking to achieve a masculine or genderless look. So now you know all about the most recent wave of curtain hair trends, from the celebs who made it popular, to the different variations, and of course, how to style it yourself. Anyone can give themselves rocking curtain hair with a little motivation and the right hair part. Pick your inspiration, grab a hair dryer and some product, and you’re well on your way to a bangin’ hair day!